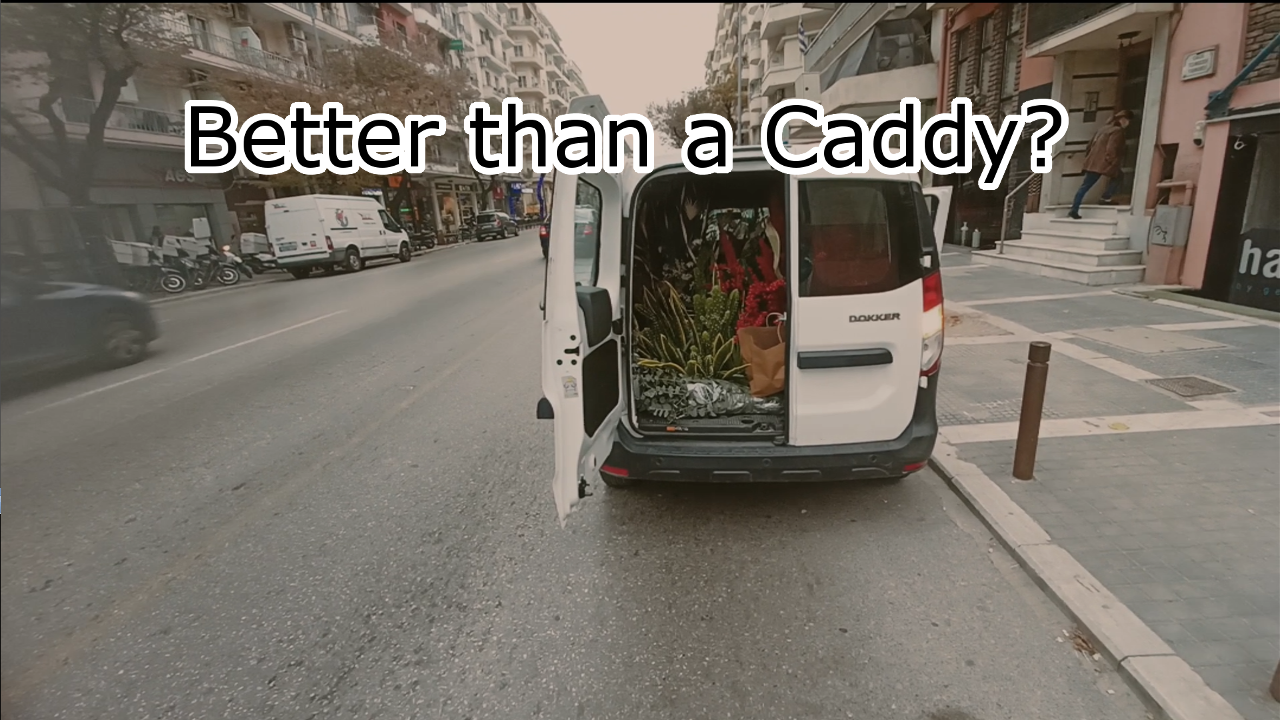 The short version of this Dacia Dokker review is that the van is outstanding. It is the first Dacia vehicle I have tested and I wasn’t expecting much but this 1.5 turbo diesel, 90 bhp version of the van massively exceeded my expectations

Absolutely no adaption process. Everything feels natural from the moment you get in. Pedals feel great, seat is great, driving position is great, everything is just great.

By far the best I have felt in a van, Caddy included. Precise, easy, faultless. Okay, its not a snickety mechanical feel but its still a joy to use. Requires no thought.

Again, just felt right at all times and all speeds

Great, again, requires no thought, perform exactly how you want them to

Super comfortable. The most time I spent in the van in one go was about an hour and I didn’t even think about them, except perhaps to contemplate how comfortable they were. I believe I could easily spend an indefinite amount of time in them without any issues.

Again, everything works in harmony, the weight of the indiciator, the heater controls everything was perfect

On the face of it they looked like a bit of an afterthought but after using them, they seemed very well designed because although the base of the cup holders were not the most supportive and did not inspire confidence, the tops of the cups could rest against the base of the dashboard so they were in fact quite stable. And there were two. Not quite as good as the NV200 on the cup holder front but what vehicle is?

For a van, very quiet. Not car quiet but not far off.

An absolute joy to use. Okay, it runs out of puff about 120 km/h but apart from that its great. Easily keeps up with traffic. And easily outpaces normal traffic if you put your foot down. Absolute gem of a power plant.

Another highlight. Perfect gear ratios and 6 speeds. Felt strong without any excessive play/backlash. Again, the only time the gearbox entered my mind was when I was thinking how nice it was.

Believe me, I did not spare the horses driving this van and I managed to get 42mpg/6.6 l/100km which is amazing. Okay, in wasn’t heavily loaded but we were not getting passed by anything anywhere. 300km for 30 Euro of Diesel with 200km on motorway, the rest around town.

Lets get the good stuff out of the way. Excellent access. Sliding doors on both sides and this did not appear to have any effect on structural rigidity, unlike the NV200.

The lamp in the back was perfect, plenty bright enough, not like the excuse for a lamp that you find in a Peugeot Boxer.

Rear doors great, load bay height good. Not really low but okay. If there was one complaint its that the doors completely obstruct the lights when they are open which is not great.

Problems with the load area.

The were shackles in the floor for strapping but there weren’t any on the sides of the van and it was not exactly obvious how you could strap through the frame of the van. I think that is quite a big oversight but nothing you couldn’t fix by drilling your own load hooks into the sides. Not the end of the world.

A word on build quality. All the handles on the van seemed super solid and that they would last forever. Again, not something that could be said about the Peugeot Boxer we had on test.

Perfect size, not too big, not too small.

Perfect plastics. Okay, not soft touch but they looked nice enough. They appeared to be strong and at the same time did not feel brittle in the slightest. Generally the gaps were good and everything seemed well designed and solid. For the price point. Perfect and again, far superior to the Peugeot Boxer.

Another highlight. I think it has the same wheel as you find in the Renault Clio and that is no bad thing at all.

Do I think the van will last

There was nothing that I encoutered that made me think “this won’t last”. The van seemed very well designed, very weel put together and performed brilliantly ie power, cornering and comfort.

I know it sounds like I am gushing about the Dacia Dokker.

Is it because my expectations were so low to start with?

Perhaps in the first hour or two but after that I was really trying hard to find faults or at least areas where it wasn’t as good as the other vans we have tested and I can tell you, this is one of the nicest vans I have had the pleasure of driving.

If you are in the market for a van like the VW Caddy and you don’t need the long wheel base version of the Caddy (because the Dokker does not have a long wheelbase version) then I would say take the Dokker over the Caddy. In my opinion the Dokker is a far nicer van to drive, a far nicer place to be and the load capacity is going to be somewhere similar.

What won’t be similar is the price.

The Dokker is a far nicer van than the Caddy and it costs less. If you are looking for a car type van with a slightly elevated seating position the Dacia Dokker is DriveTune recommended.