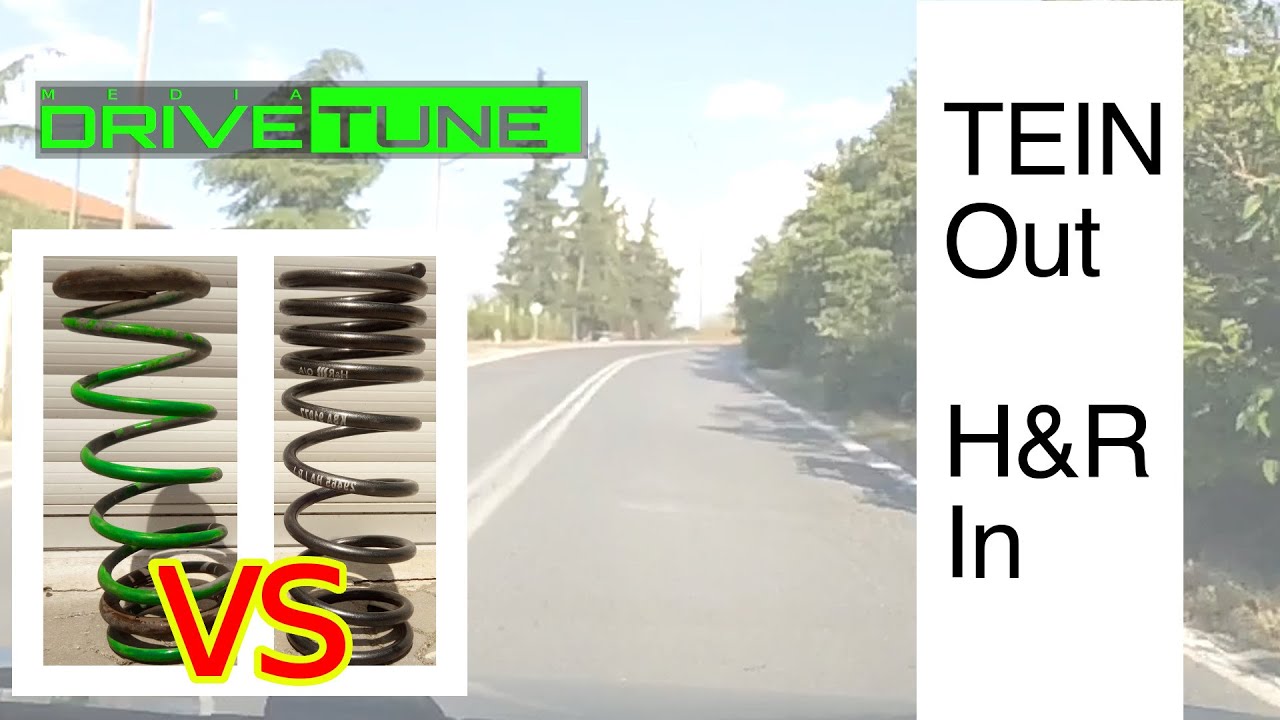 So I have been using TEIN S-Tech lowering springs with Bilstein B8 dampers for over 5 years and generally I have not been satisfied with the car.

Banging. Lots of it. Over seemingly innocuous bumps big BANGS can be felt and heard coming from the front suspension. It sounds for all the world like the damper is bottoming out and is then piling all the force into the strut tower of the car. Cringe-worthy at best and probably damaging.

Driveshafts. In the last year the car has picked up an appetite for consuming driveshafts, specifically the driver side. The last driveshaft was fitted less than 5000km ago and already it is starting to make noises

Body Roll. The car does roll in cornering and dive under breaking. Granted, nowhere near as bad as with the standard springs but neverthless, more than I would expect with uprated lowering springs

My hypothesis was that all of these problems were being caused by the car being too low. The TEIN S-Tech springs dropped the car by a massive 65mm and I believed that this was the cause of most, if not all of the problems listed above. The H&R lowering springs dropped the car by a modest 35mm, I anticipated that this would solve most of the issues and at the very least, make the issues less bad.

After changing the springs the difference was nothing less than a revelation.

Small bumps which would send huge bangs through the body of the car are now next to unnoticeable. The upshot is the car is much quieter and much more comfortable

Body roll has been reduced noticeably, the is a much greater resistance to roll and pitch

In short, the result of fitting the H&R lowering springs has been all positives with no negatives except..

If I was going to be ultra picky, I’d say the smallest bumps in the road ie ripples, have become more noticeable. And the ride over the smallest bumpest has become slightly bouncy (Update: After a couple of months these effects have stopped)

In my experience the H&R lowering springs are a vastly superior product to the TEIN. Yes ride comfort is super subjective but I don’t think anyone can argue that suspension bottoming out and make huge bangs is a good thing. The H&R lowering springs do not bang and bottom out while stability and comfort have been improved.

Some people may argue that it’s not really a fair test because the lowering between the two kits is not the same but I disagree, I think the amount of lowering is irrelvant.

When I buy a non adjustable product, in this case lowering springs, I expect the manufacturer of the spring to do their research and come up with a suitable design ie one that does not compromise the performance of the car in a major way.

I don’t think it is up to me to tell TEIN they have it wrong, at least when I had no experience of their product, like I did when I bought the springs. When you don’t know a brand you have to trust they know what they are doing and in this case I feel let down. Yes it is partly my fault for choosing springs that lowered the car so much, I was young and foolish, but I was relying on TEIN to make it work.

What have I learnt

If one spring manufacturer is offering springs that lower the car by significantly more than the other manufacturers I will stay away and choose a spring which has the same lowering as the consensus.

For example if TEIN offers 65mm lowering and Eibach and H&R are offering 35mm, I will stay away from TEIN.

On the other hand if I see TEIN springs being offered with the same lowering as TEIN and Eibach will I consider TEIN? That would depend on the price, if TEIN lowering springs were in the ball park with Eibach and H&R, sure, I’d consider them.

It’s not that I think TEIN make a bad product it’s just on the product I bought from them, I think they dropped the ball.

One Reply to “TEIN vs H&R Lowering Springs”